By Michael Greensmith  •  8 years ago  •  Uncategorized

My Steampunk iPhonograph has made it into Tree Hugger’s 10 Most Loved Steampunk Style Gadgets! 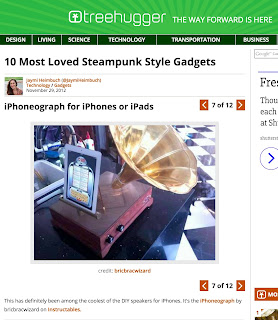 Have a look here:  10 Most Loved Steampunk Style Gadgets

Tell me you’re not head over heels for the Victorian Pocket Watch designed by Ezekiel Empire Rosenstein of Alchemy Jewellery also featured. It’s solar powered! This piece really stirred my imagination for how well he has fused the Victorian era-inspired aesthetic with a modern power source.

Well I say ‘modern’ but let’s not forget photovoltaic power (aka solar cell technology) was actually a Victorian discovery (by William Grylls Adams and his student Richard Day). Therefore, when I think about it, the entire piece is actually of the Victorian era in its entirety – both in the realisation of its look and by fulfilling the aspirational nature inherent in those early days of solar cell experimentation.