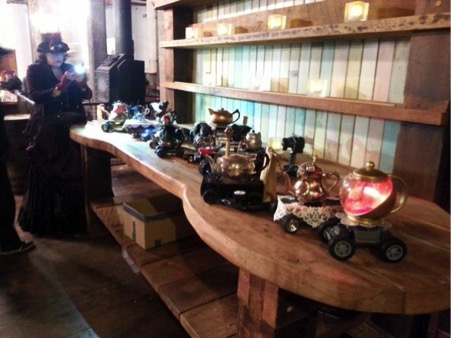 This blog post is dedicated to Donna Rose, the lady who inspired Countess Simona to create the sport of Splendid Teapot Racing. For the story of how it transpired, read on.

Splendid Teapot Racing is a Steampunk sport for all to enjoy! Originating from New Zealand in 2014, it was born of the steamy imagination of Countess Simona of Splendid Teapot Racing. With the initial racing vehicle ‘The Salty Sea Dog’ re-made from a classic 1950’s/60’s aluminium canteen teapot and a ‘junker’ radio controlled base by Captain Various, it hasn’t taken long for the craze to spread. 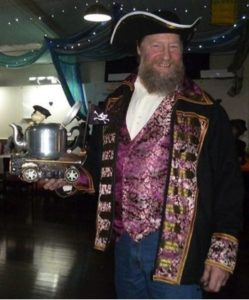 Captain Various with the very first racing teapot ‘The Salty Sea Dog’, made by him! Image: Courtesy of Splendid Teapot Racing.

What is Splendid Teapot Racing?

Splendid Teapot Racing is a superb exposition of the creativity, speed and agility latent in all teapots that sit gathering dust on shelves everywhere. 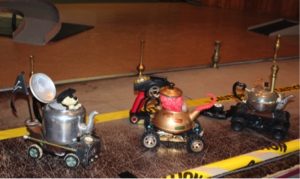 Splendid Teapot Racing competitions are a call to all makers – amateurs and professionals alike. Countess Simona describes it as a spectator sport which is “just silly enough”. She is firmly of the opinion that the more mayhem and absurdity ensues, the more entertaining the event.

Entrants are required to create a teapot-centric chassis, accessorised at the pleasure of the inventor, and mount this to a radio-controlled ‘vehicle’. Given that there are hobbyists with a range of expertise (and widely varying budgets) when it comes to radio controlled vehicles, racers are separated into 2 classes: ‘High Performance’ and ‘Junker’. The ‘High Performance’ class is for those hobbyists with electronics/robotics expertise and the budget to purchase and modify hobby shop calibre radio controlled vehicles for the base of their teapot chassis. The ‘Junker’ class of races are for those participants who use radio controlled devices such as one may pick up at Kmart or a junk shop for the base of their teapot chassis. Countess Simona has fashioned it thus in order to make the sport as participatory as possible and to ‘level the playing field’ so that those with the greatest expertise and budget for radio controlled devices don’t walk away with all the prizes!

That being said, those top ranking contestants in the High-Performance class such as Colonel Hawthorne make it through the racing course very rapidly! The Colonel currently holds the record of 27 seconds for course completion with his racing teapot. 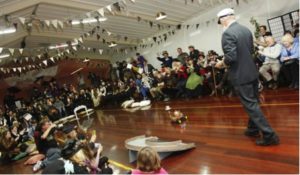 The Inspiration Behind Splendid Teapot Racing

The idea for creating the pastime grew from Lady Simona’s friendship with Donna Rose who has since passed away. Donna Rose had osteoarthritis as a child and as an adult, losing more mobility over time, she used a wheelchair that she controlled with a joystick. She would attend and enjoy all the themed events in her local area but wanted to participate more than merely dressing up. Lady Simona thought that if Donna Rose could operate a joystick, she could certainly operate a radio-controlled device! So…Countess Simona broached the idea of racing teapots on a radio-controlled base with Captain Various who initially scoffed but, as is his want, turned around and came up with a working prototype: behold the Salty Sea Dog!
Thus, the sport of Splendid Teapot Racing derives from the generous spirit of inclusion. Salient it is to remember that women are far more likely to be Carers and involved in caring-related professions. It seems no wonder, then, that this marvellous sport was conceived by a woman who was looking out for her friend.

As the well-known US steampunk event maestro, Jeff Mach has recently said simply and ever so eloquently, ‘Hate is not a steampunk value’. Steampunk is about embracing and celebrating the diversity and potential of the human imagination and spirit.

A Bit About Countess Simona: Living and Breathing the Value of Diversity

The inter-cultural, cosmopolitan nature of Steampunk is inherently evident in the stance taken by Countess Simona who conscientiously goes about creating Steampunk looks that reflect her Antipodean heritage – a way of being that is redolent of her residence in Southern Pacific climes and her whakapapa (Maori genealogy and heritage). Claiming heritage from southern Maori tribes, the Countess works on incorporating cultural iconography in her garments, substituting these for lacework embellishments, trim, applique and other details. As Steampunk is about the future, it re-appropriates colonial histories (so much a part of the Victorian era) and re-imagines it. This is a key part of creating a new future in which we all share a place.

What do you bring to steampunk from your own cultural heritage?

Splendid Teapot Racing Around the World

The Inaugural Teapot Racing Event was held at the 2014 Steampunk NZ Festival which was in Oamaru and ran from 30 May to 2 June.

In keeping with its colonial legacy, there have been a few rogue teapot racing events that have occurred in Australia without the Splendid Teapot Racing imprimatur – the last was the Eskbank Steampunk 2016 event at Eskbank House and Museum in Lithgow on 30 July 2016. Perhaps the colony has now been chastened into good behaviour as we note that the Goulburn Historic Waterworks will host the Steampunk Victoriana Fair on Saturday 15 October with Splendid Teapot Racing and the blessing of the Countess on the afternoon’s agenda. 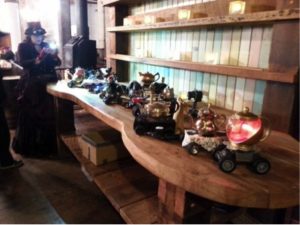 Racing Teapots all in a row! Image: Courtesy of Splendid Teapot Racing

The course taken by the racing teapots which have staggered start times involve navigating between six and ten obstacles. There is a 3-minute maximum time limit allowed. Obstacles include breakables such as precariously balanced teacups and the odd candlestick. Breakages are common so don’t drag out your Wedgewood ‘Cornucopia’ or your Clarice Cliff pieces if you’re setting up the course!

However, the Countess was at pains to explain that Splendid Teapot Racing is NOT a version of Robot Wars. Whilst mix-ups and tip overs and china breakages happen and are funny and even though remote control bandwidths for different vehicles may overlap in teapot drag racing events (a tea pot drag race generally closes off a Splendid Teapot Racing event), competitiveness aimed at solely smashing other people’s creations or blowing things up for the sake of it is not the heart and soul of teapot racing. One definitely gets the sense that it is a rather refined pastime! 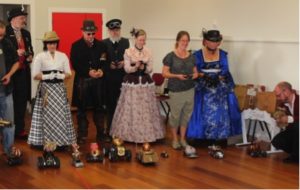 Splendid Teapot Racing has also posted ‘A Guide for Organisers’ which you can access here. It’s very helpful and shows just how much thought has gone into making the pastime a success at social gatherings.
As with all good sports, Splendid Teapot Racing has already spawned a love child: Teapot Sheepdog Trials which is run by Capital! Steampunk New Zealand. Indeed, it would be hard to think of a sport which speaks to the New Zealand sense of humour and penchant for creating ever more hilarious sheep-related activities which give rise to a veritable library of jokes which people routinely crack at the expense of New Zealanders.

The first Teapot Sheepdog Trials were held at the CubaDupa Festival on 19 March 2016 in Wellington, New Zealand. We wish this style of event all the best for the future!

Where To From Here for Splendid Teapot Racing?

Countess Simona is absolutely delighted to see the sport spread. She foresees that an age-old tradition – that of guild membership – is a potentially on the cards as the adoption of the pastime spreads and the collective imaginarium grows.
NOTE: This blog post originally contained an error in respect of Colonel Hawthorne’s Splendid Teapot Racing winning time. The time given was 21 seconds (or thereabouts). The winning time is, in fact, 27 seconds. The article has been amended to reflect this.

No greyhounds, thoroughbred horses or other animals are harmed through the adoption of this sporting pastime!

We now have Sir Round-a-Sound ‘Sapphire’